We have detected that JavaScript is disabled. Here are instructions on how to enable JavaScript in your web browser.
Skip to content Skip to main menu

Something was seriously wrong with Giancarlo Caldesi. The successful, energetic, larger than life character was listless, overweight and depressed. He had excruciating pain in his joints and everything was an effort.

Business was going well, he was an award-winning restaurateur and cookery school owner. He’d been awarded the honour of Cavaliere by the Italian Government for his work in promoting Italian food, he’d co-authored a number of critically acclaimed cookbooks.

The answer came in 2011 when he was diagnosed with Type 2 Diabetes. Together Katie and Giancarlo tried many ways to combat the diabetes and he struggled to reduce his portions of food and cut back on sugar but he actually worsened and his blood sugar levels rose. He looked and felt even worse.

Three years later in 2014 he weighed 17 stone, his HbA1c levels (blood sugar count) was 79 millimoles per mole. Things were not good and on top of this he was diagnosed with a severe gluten intolerance by Jenny Phillips, a superb nutritionist and now a Caldesi family friend. When Jenny told him, it felt like his world of food and everything he loved was forbidden and although determined to fight he was very low. No pasta, no pizza, no choux buns or bread. Imagine an Italian man who, over almost 60 years, was used to eating his beloved pasta at least once and often twice a day being told to stop. What he didn’t realise is that this diagnosis would probably save his life.

When Katie met Giancarlo she used to describe him as having the energy of Tigger from Winnie the Pooh, by 2011 he’d lost this energy and now his demeanour more resembled that of Eyeore.

However as soon as Giancarlo gave up the wheat and therefore dramatically reduced the carbohydrate part of his meals, he felt better, the swelling in his joints disappeared, his blood sugar levels dropped and he began to lose weight.

Rather than being crushed by the diagnosis Giancarlo took to the challenge. He developed a gluten free pasta recipe as well as finding alternatives to pastry, bread and his pizza.

At this time he and Katie were commissioned to write a book about salads which meant they were constantly testing recipes made primarily from plant sources such as salad leaves, herbs and vegetables.

Inadvertently they were following a low-carb diet. Katie was constantly online looking for information and recipes and came across a world of low-carb eaters and most importantly low-carb eaters who were diabetic and who had turned their conditions around.

Through the site diabetes.co.uk the Caldesi’s became familiar with the name of Dr David Unwin. He runs a GP practice in Southport and with his wife Dr Jen Unwin, holds a clinic to support diabetics and people with other conditions who can be helped by a low-carb diet. The Unwins, Jenny Phillips and the Caldesis are keeping in close contact to exchange ideas about this low-carb way of living and held one of their popular Sunday Sessions at Caffe Caldesi to promote this way of life.

Now six years on from Giancarlo’s first diagnosis of diabetes his HbA1c levels have dropped to just 38, he is back in the normal range and the diabetes is in remission. It’s been a difficult journey but Giancarlo feels if he can do it then anyone can, and it’s never too late to make a start.

The latest Caldesi cookbook is ‘The Diabetes Weight-loss Cookbook’ and is an Amazon Bestseller containing recipes developed by Katie and Giancarlo when Giancarlo was diagnosed with type 2 diabetes. The recipes within make a low-carb diet one that all can enjoy and is packed full of dishes that are both enjoyable to eat and leave you fuller for longer. 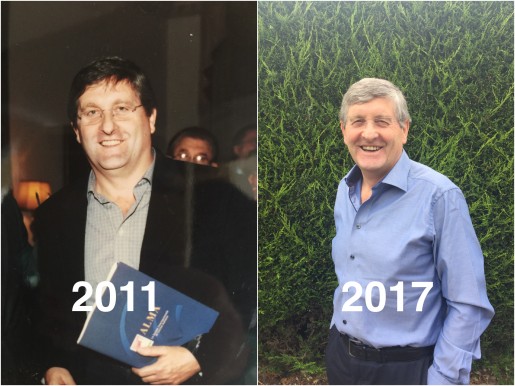 His next project is to work with Katie in writing a book about his journey, how low-carb eating has helped him and how he adopted a life-style that quite literally saved his life. And Katie and Jenny are running a series of cooking courses to help people like Giancarlo called Stop the Spike see here for details.

Giancarlo’s story was recently featured in an article by Diabetes UK. See here for more.

Uploading
Processing
FIND US ON