It’s the game season and if the mention of ‘game’ conjures up images of the upper classes decked in tweed while slugging sloe gin at expensive shooting parties – think again. Game isn’t just the preserve of the rich, it’s available to everyone and according to nutritionists and environmentalists we should all be eating a lot more.
Italians have always been very big on hunting and eating game, it’s part of their culture across all social classes. They eat rabbit like we eat chicken and wild boar like we eat pork.
The great thing about game is that it’s a sustainable source of wild meat and it’s on our doorstep. Wild game exists naturally and therefore puts no additional strain on the earth’s resources. As game is frequently culled to protect crops it is a sensible option to eat it. 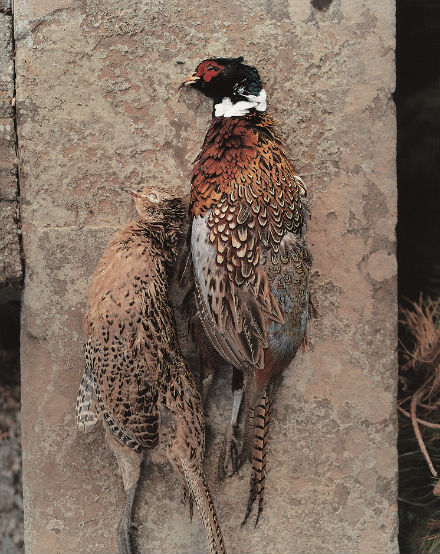 It’s low in fat, low on cost and full of flavour and yet it has been out of fashion for years in the UK. Perhaps in this homogenised cling-filmed wrapped world of convenience we shun the idea of dealing with a bit of fur or feather and don’t know what to do with the produce but that shouldn’t come between us and an easily obtained source of protein. Thanks to celebrity chefs and campaigns to get us eating more game there has been a resurgence in game and it is appearing on more and more menus. Once converted to the delights of game, food lovers fast become fanatical about the range and quality of game available in the UK.
Rabbit seems to be getting popular and with a general desire for local and sustainable foods it has again become a regular on the restaurant plate rather than just in children’s books. Wood pigeon, venison, partridge and pheasant are also much more popular than they have been in the last fifty years.

History of game
Rabbit is indigenous to North Africa and Spain and was imported by the Romans to Italy in the third century BC. In medieval days sailors released rabbits onto distant shores to have a supply of meat. It is now found throughout the world. Deer and pheasants too are thought to have been brought over by the Romans although some species of deer existed here since Neolithic times. The tiny muntjac deer are originally from Asia but brought here by the Duke of Bedford and then escaped from his grounds.
Rising Sales
Supermarkets, butchers, farmers’ markets and on-line distributors are all now stocking game. In fact venison, pheasant and grouse have become so popular that sales rose 46 per cent to a market value of £57 million from 2004 to last year. By 2011 those sales are due to increase by a further 47 per cent and to be worth £84 million. However, we need to encourage more British farmers to keep venison as we now need to import from New Zealand to keep up with demand.
The growth in game sales exceeds those of poultry and more typical red meats but it is still a niche market and is tiny compared with the £3 billion value of poultry and £2.9 billion of red meat.
When should we eat it
Rabbit can be eaten all year round but is best avoided over summer as they breed at this time. Grouse is available from 12th August to 10th December. Partridge is September 1st to February 1st and pheasant October 1st to February 1st. Most deer are November 1st to April 28th apart from fallow and red deer which are August 1st to April 30th and Roe bucks which are April 1st to October 31st. However it is still an offence to kill game on a Sunday and Christmas day in England and Wales.
To hang or not to hang
The fashion was to hang meat to improve flavour, sometimes until maggots crawled out of it but now birds and some deer are only hung for a day or two. Game also freezes well and is thought to make the meat more tender which again negates the need to hang it.
Why we should eat it
Game is largely free-range which means with all the exercise the animals and birds have they are naturally low in fat and cholesterol. Most wild game has 5% to 7% fat, whereas lamb has 25% and a piece of prime beef can contain as much as 45%. The varied diet of wild game means more variety in taste in the meat and interestingly flavours will change according to the season and what is on the ground to eat.
Venison is high in protein, iron and Omega 3. Pheasant and partridge are high in iron, protein, Vitamin B(6) and selenium which helps to protect cells from damage caused by free radicals. Rabbit meat is low in fat, high in protein and is a good source of niacin, iron, phosphorus, and vitamin B12.
How to cook game
Although it is great that game is low in fat, this means it is likely to dry out during cooking so some additional oil or fat should be added to protect the meat. This is why birds are often wrapped in pancetta or bacon. This process is called “barding”. Regularly basting with the cooking fat or pot-roasting also helps this. Young or farmed rabbits are suitable for roasting but larger, wild ones need to be cooked slowly although they do have more flavour. The offal of rabbits and birds is perfect for terrines. Use the breast of game birds for quick pan-fried dishes and the rest for stews or ragu.
For more ideas and tuition in preparing and cooking game come to one of our game courses or our game evening, details below. For bookings go online to www.caldesi.com or call the office on 0207 487 0750.
The Game course with Caldesi’s Kitchen and Portman-Burtley Estate – Gerrards Cross, Bucks
Meet Gamekeeper John Blackiston at the beautiful 2,000 acre estate for a light breakfast and find out more about game birds and venison. Learn skills such as how to pluck and prepare a pheasant or partridge, pigeon and rabbit then go to Caldesi’s Kitchen to learn to bone, bard and cook game. Prepare dishes such as Pot roast Pigeon on saffron and mushroom risotto, Pheasant with orange and chestnuts, Venison ragù, Tuscan Rabbit with olives and more. Date:Saturday 27th November. Time: 9.30am – 3.00pm Price: £150
Cooking with Game
The colder months are the perfect time to enjoy game; join Katie in this hands-on course, together with her you will prepare game birds from the feather to the pot as well as cook meat such as venison and rabbit. During the lesson you will learn how to bard and tie birds and cook them in the best way to keep the moisture in. Dishes may include pot roast pheasant with orange and chestnuts, wood pigeon breast salad, venison with preserved cherries and Tuscan rabbit with olives.
La Cucina Caldesi, Marylebone Cooking Monday 29 November 2010 Price: £150 10.30am – 2.30pm


Arrosto Misto
Pot-Roast Hunter’s Catch
This is one of those old recipes that you just know would once have been cooked in a cauldron above afire. We still possess Giancarlo’s grandmother’s pot that used to be suspended on a tripod at different height to vary the cooking times. It’s a meal in one: celery and carrots constitute the vegetable component, the meat is your protein and the potatoes your carbohydrates. Most lean cuts of meat will work in this recipe and you don’t have to use a mixture, guinea fowl or chicken alone, for example, would work perfectly well. You could ask your butcher to joint the poultry for you. Do brown the meat very well, a very dark appearance will ensure a good flavour to the dish. Traditionally the dish uses pieces of pork fat, or lardo di colonnata, which melt down during cooking. If you can buy lardo in your local deli, it will impart a rich flavour and keep the meat moist but if you cannot get it, butter or olive oil also works well. This recipe and photo are taken from my book The Italian Cookery Course published by Kyle Cathie.
Serves 6

Heat the oil, butter and lardo (if using) together in a large saucepan over a medium heat. When hot, add all the different meats together and fry for about 30 minutes or until well browned, turning the joints only once during the cooking time. Next add the celery, carrots, onion, garlic, rosemary and bay leaves and fry until golden. Pour in the wine and enough stock to almost cover the meat. Put the lid on askew to allow some steam to escape, and simmer for about 1 1/2 hours until the liquid has almost disappeared. Half way through the cooking time add the potato. The liquid should reduce down to a sticky consistency and the meat and potatoes should be well cooked and browned all over. If the liquid disappears before the meat is cooked add extra stock; conversely if there is too much liquid when the meat is cooked, remove the lid and boil hard to reduce the amount. Serve with a salad and crusty bread