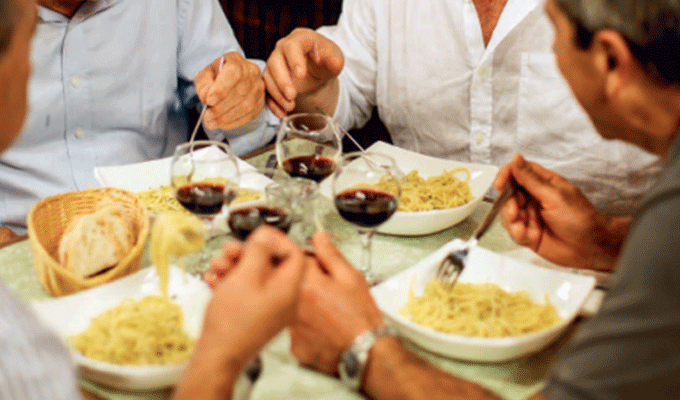 On 25th October we held a special World Pasta Day event at La Cucina Caldesi which took the form of live demos, talks, tastings and the largest display of pasta shapes outside of Italy. 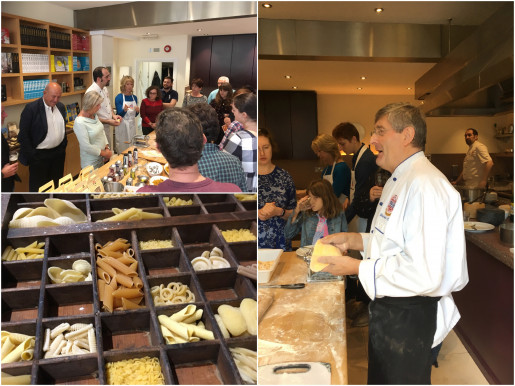 Pasta is eaten in all five continents of the world and according to a study of global food trends by Oxfam, it is the world’s favourite food. The aim of World Pasta Day is to underline the economic feasibility, gastronomic versatility and nutritional value of pasta. The day is recognized as an Intangible Cultural Heritage of Humanity by UNESCO nonetheless.

“Pasta is a feeling as well as a fuel. In our opinion there is nothing quite so satisfying to eat as a bowl of hot pasta clinging to a rich, intense sauce – from the aroma of the sauce warming in the pan, the look of a dish that will surely quash your hunger to the first bite into al dente pasta that slides easily from fork to mouth”. 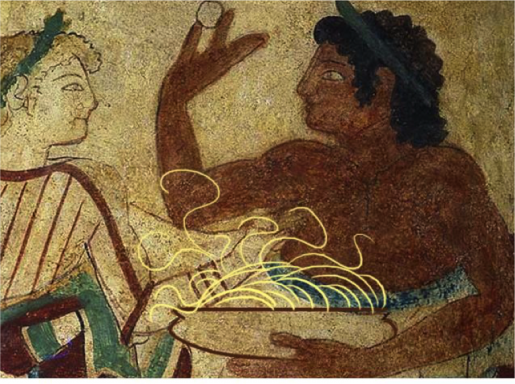 No one can say for sure where pasta appeared first in the world. In its basic form it is a mixture of flour and water and as such could have been thought of by many people.

It is a common misbelief that pasta was first bought to Italy in the 13thcentury from China by Marco Polo. Historians point out that while Polo was away on his travels in the 1270s, there is a reference to a soldier in the northern Italian city of Genoa, who owned a basket of “macaronis.”

At Cerveteri near Rome, we have seen Etruscan tomb paintings which show a bowl with flour and water, a rolling pin and even a cutting wheel dating to the 4thcentury BC.  It appears that the Etruscans created Pici, a hand-rolled pasta still massively popular today. And ancient Roman writer Apicius described making lagana, a forerunner to lasagne made from cooked sheets of flour and water.

In 1154 AD an Arab geographer, Al-Idrisi, wrote of strands of pasta made in Sicily, it was a technique introduced by the Arabs from Palestine. The lengths of pasta were dried and exported in huge quantities

than fresh pasta. from Norman Sicily. There are documents dating from 1371 that reveal that the prices of macaroni and lasagne in Palermo were triple those of bread. As such it was a food enjoyed mostly by the aristocracy and the Jewish population.

From the 13th century, references to pasta dishes—macaroni, ravioli, gnocchi, vermicelli—crop up with increasing frequency across the Italian Peninsula.

There is a great history of pasta production in Campania. The famous ’ndunderi’ – a type of gnocchi made from flour and cheese – from Minori are an ancient, possibly Roman recipe and have even been recognized by Unesco as one of the first types pasta. 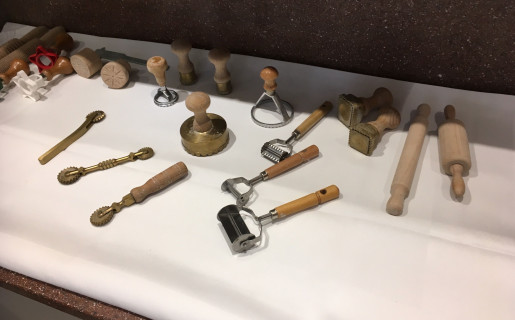 Though Italians can’t say they invented pasta, it was in their land that pasta was developed further than in any other culture. From perfecting its manufacture to exportation and embracing it as their own they have made Italy synonymous with pasta in their reputation around the world. There is even the Museo della Pasta, a museum of pasta in Parma which demonstrates the ancient and modern production of pasta from grain to milling to fresh and dried pasta making.

Difference between dried and fresh pasta 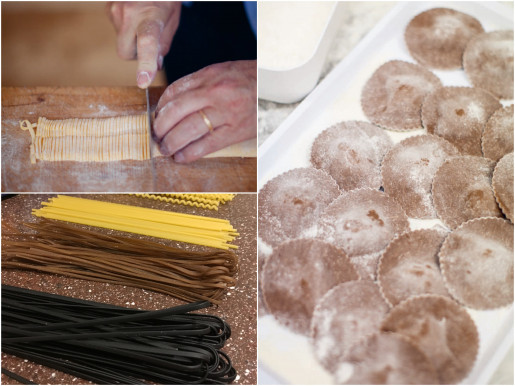 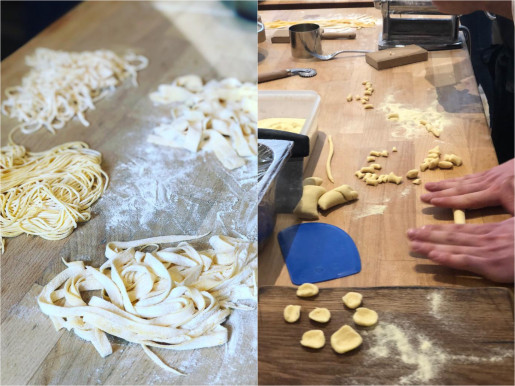 All pasta in Giancarlo’s household was fresh until the 1950’s when dried pasta came onto the market and his mum was no longer tied to the kitchen table making it every day. I am sure she loved her new found freedom and time saving packets of spaghetti. However she and many other Italians never lost their love of freshly made pasta. Southern regions such as Sicily eat less fresh pasta than their northern counterparts and when it is made in the south it frequently contains semola flour and no egg in contrast to the rich egg pasta from the north.

Originally pasta ribbons were hung over wooden poles outdoors and dried in the sunshine and light breezes of southern Italy. It could then be transported which allowed the sale of it. Most dried pasta in restaurants is cooked before, there simply isn’t time to cook it from scratch to order. This is different for fresh pasta which is much quicker to cook, so if you are watching your carbs but still want to eat pasta then choose a small portion of dried pasta. 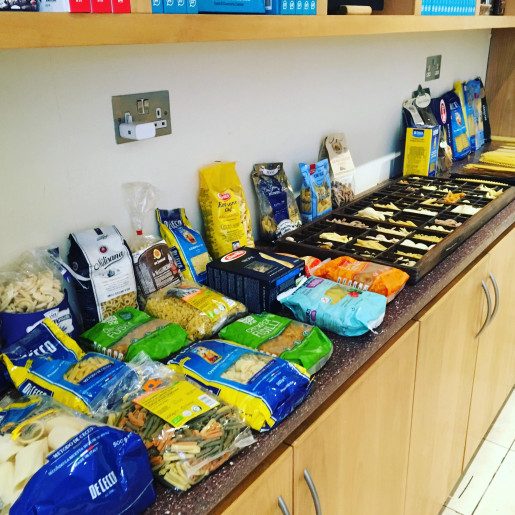 Dried pasta these days is made in factories and the lengths are extruded through metal dyes which gives it a smooth, slippery finish. This means it is less absorbent than fresh pasta and is ideally suited to wetter sauces made with wine and cooking juices such as a sauce made from clams and white wine. If you can find pasta extruded through bronze dyes (it will say trafilata al bronzoon the packet) it has a slightly rougher surface than a pasta made with a Teflon dye. The slight roughness mimics pasta made by a traditional wooden rolling pin which helps the sauce stick to the shapes and gives a better result to the dish.

The ideal flour for dried pasta is grano duro 00 (pure durum wheat flour). The “00” refers to the milling, it means it has been through the mill more times than any other flour, each time it is refined so the flour is very white, light and fine like talcum powder. The Italian producers make the best flour in our opinion although British producers are now producing pasta flour it is not usually as fine or light as the Italian 00 flour. Europe produces the highest yield of durum wheat (1,516,000 metric tonnes) globally with China 2nd(1,297,000 metric tonnes). Combined they grow more durum wheat than the rest of the world put together. 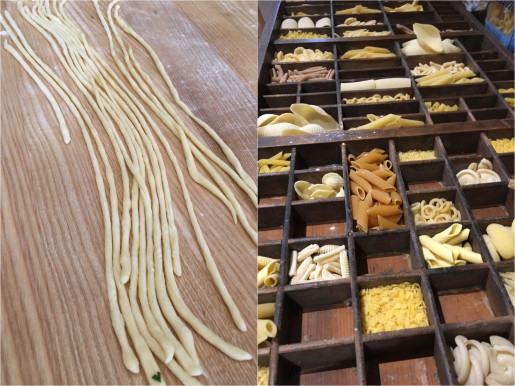 There are at least 300 different shapes of pasta (some say as many as 350 with regional variations). There is a size and shape for particular sauces; peas or halved cherry tomatoes slip inside paccheri, the wide short tubes made in Campania and ragu made with finely chopped meat is trapped inside penne. Tiny florets of broccoli and crumbled sausage meat sit snugly in orecchiette, the little ear shapes. Ragu alla Bolognese is never served on top of spaghetti, only tossed into fresh egg Tagliatellemade so thin you are supposed to see the bells of the local church through it. Over the border in Tuscany wide ribbons of pappardelleare robust and opaque, dressed with game or duck ragu. Stellineor little stars and ditalini, little fingers, go into soups. The combinations preferred by Italians are endless and each family, town and region has their favourites.

What to eat if you can’t eat pasta? 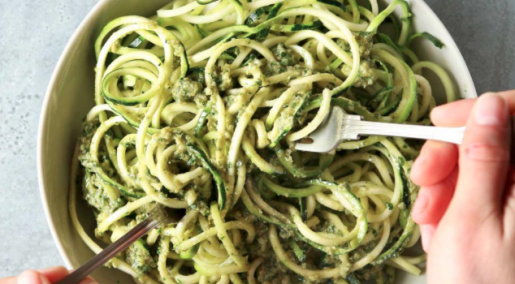 Giancarlo was hit with a double whammy when his doctor told him some years ago he not only had Type 2 diabetes but was also gluten-intolerant. Pasta is a treat for him now and has to be gluten-free. After much experimentation we developed our own recipe for gluten-free pasta which works for stuffed or ribbons of pasta. However to help avoid the spike of glucose in his blood from carbohydrate we have been really happy to discover vegetables as an alternative.

Just because Mamma would never have had her ragu with anything but freshly made ribbons of pasta doesn’t mean that her son couldn’t enjoy his ragu with similar looking ribbons of steamed cabbage tossed in black pepper and butter. He is very happy to eat his favourite Caldesi sauce on roasted courgettes, onions and aubergines and topped with a scattering of parmesan and basil leaves. Courgetti, the spiralised lengths of courgette, are wonderful if very briefly sautéed with garlic, chilli and olive oil before being topped with sauce.

To demonstrate the versatility of pasta here’s a very quick recipe (and variations of) which makes an ideal midweek supper:-

After cooking dried pasta lengths such as spaghetti or linguine, drain and toss them into a hot frying pan with extra-virgin olive oil and one of the following combinations:

Although fish is not usually eaten with grated Parmesan, a scattering is often welcome. 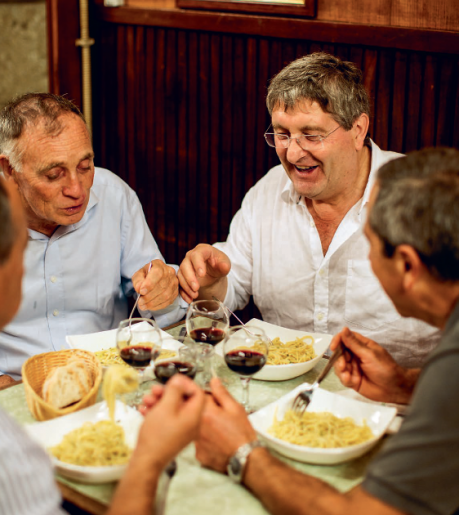 Our latest book ‘The Long and Short of Pasta’ published by Hardie Grant is a compendium of some of our favourite pasta recipes from across Italy using both fresh and dried pasta. See HERE for signed copies.