When you think about choosing an olive oil think about how you would choose a wine- an expensive fine wine at one end of the scale to savour with something special or everyday, quaffable ‘plonk’ at the other.  In my kitchen I have little bottles of single estate extra-virgin olive oils, I buy them when I am in Italy or from Italian deli’s – I know their cost and I use them accordingly. I swirl them onto hot soup, dip bread into them and love them on tomatoes, scrambled eggs and avocados with a little salt. Just heavenly. I also have bigger bottles of extra-virgin olive oil made from a blend of olives from different areas. They are cheaper and I use these for cooking.
The colour, the fragrance and most importantly the flavour is determined by a vast range of factors.  The variety of olives grown, where they are grown, the quality of the soil and as always the weather during the growing season all play a part to give each oil its unique character.  Regional differences in oils therefore apply and within each group of regional oils, there will be further differences but to generalise some examples would be that Ligurian oil is delicate, Tuscan is robust and fruity, Sicilian has a spicy kick and Pugliese is robust and peppery. As with wine it is best to match the oil to a food that is similar in strength of flavour.
Four bottles of oil from one olive tree
There is still something magnificent about the process of making olive oil even though it may have developed far from the early days of production when donkeys pulled giant stone grinders.  I went to the Filippo Berio plant in Tuscany and watched the first oil of the season being made.  To witness the gleaming machinery go into action on a vat of fruit picked that morning was amazing as the first absolutely luminous green oil poured into the first bottle.  We tasted it within seconds of being made on a spoon, it was as powerful in flavour as it was vibrant in colour. Then we ate it poured over Ribollita (thick Tuscan vegetable soup) to celebrate the new season just as Tuscans have done for years. There is a Tuscan word “fett’unta” meaning “oiled slice” which refers to the slice of bread used to dip into the oil, often rubbed with garlic – the forerunner of bruschetta.
The production is about separating the ‘pomace’ (the solid matter from the skin, pips and flesh) and the water from the oil. The olives that we saw being picked in Tuscany were on the turn between green and purple.  It is this mixed batch which is important to create the right flavour.

The harvested olives are separated from their leaves and then washed.

After being  milled to a paste the liquids are separated from the solids, traditionally by a hydraulic press or now usually by a centrifuge. The oil and water is then separated by a second centrifuge.  At the end of it all it will have taken around 5 kilos of olives for every litre of oil produced, that’s around four bottles of oil from one tree.
The separated extra-virgin olive oil from the first pressing is bright and luminous. 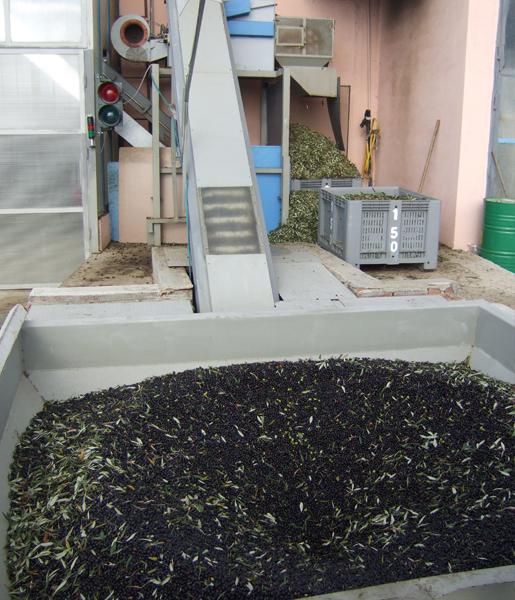 The leftover pomace is collected as used as fertiliser to improve the ground, nothing is wasted.

So what do virgins have to do with it all?
Well “extra-virgin” just refers to the oil’s purity, being the first cold pressed oil to be made from the olives.
Cold-pressed?
When heat was used more frequently to separate the oil, the “cold pressing” was really important and made that oil stand out from the rest.  Heat is the enemy of flavour here and fortunately the steam and hot water processes that used to make this separation easier are now confined to history. So all the oil we know as ‘virgin’ is entirely cold pressed these days.  It is often not even mentioned on labels any more so don’t choose one just because it states “cold pressed” on the label, they all are.
The grading of olive oil is based on acidity – the lower the better. Higher acidity compromises the flavour of the oil.  Some of the best Italian extra virgin oils have an acidity of less than 0.1% but this is difficult to find outside Italy.
Now for some definitions set by the IOC, the International Olive Council:
Extra Virgin Olive Oil – considered the best, least processed, taken from the first pressing of the olives, less than 1% acidity. It should have no defects and have a fresh flavour of olives. It should not be extracted with the aid of chemicals and should be produced under the temperature of 30oC.  Any higher temperature would degrade the oil.
Virgin Olive Oil – has up to 2% acidity. This will be refined before being sold or if designated not fit for consumption will be known as lampante virgin olive oil.
Refined Olive Oil – has up to 0.5% acidity.
Olive Oil – undergoes processing, such as filtering and refining, often blended with refined and virgin olive oil – up to 3.3% acidity
Olive Pomace oil also known as Olio di Sansa – chemically extracted from the remaining olive pulp after the other oils have been removed, refined and then blended with virgin olive oil. Up to 0.5% acidity.
To taste oil
Firstly know that colour doesn’t matter. Professional tasters are often given blue glasses to taste oil as the colour disguises any natural colouring of the oil. A deep green oil is no better than a golden yellow one.
Flavours vary considerably. Many much sought after extra virgin oils from Tuscany and Southern Italy have a very peppery taste and can be beautifully pungent. In contrast there are those with a mild fruity taste or a herby scent. Just like wine you can find a whole host of background flavours from grass to tomatoes, hints of lemon or even a tinge of artichoke. And like tasting a wine swirl a small amount around in a glass in the warmth of your hand.  The heat will gradually release the scent of the oil.  Smell the oil first and then take a small sip.  Swill it around your mouth tasting it in all parts of your mouth and finally swallow.  Concentrate on the flavours, is it pungent and peppery, is it fruity (like tomatoes), or bitter?  Does the flavour last after you have swallowed it and most importantly did you like it?  Don’t be surprised if the oil makes you cough, that doesn’t mean its bad and it frequently happens on our olive oil tasting sessions. If however, the oil tastes bitter and unpleasant that means it has a defect and should be discarded.
Good for your sex life and makes you live longer?
Olive oil is the healthiest oil in our opinion (rapeseed producers may not agree!) with no cholesterol and it is rich in vitamins. Apparently olive oil can act as an aphrodisiac as the Vitamin E contained in it can boost your sex drive – that would explain the Italians!. Studies in Mediterranean countries have shown that the rates of heart disease is lower than other parts of the world. Many feel that this can be explained by the high olive oil content in the diet of the region. It is certainly an excellent source of antioxidants which help deter the effects of ageing and protect against heart attacks.
Katie’s Tips for using and storing:
People always ask me at our cookery school how to choose an olive oil.  If tasting is not an option my advice is to be guided by price in reputable shops.  After that it is personal taste, if you like an expensive oil use it for drizzling over soups and pouring over salads to get the most from the flavour.  A good reasonably priced oil from a known producer will be perfect for cooking.
We use three oils in our restaurant kitchens:-  A good quality extra-virgin olive oil that is not too piquant in flavour is used to shallow fry and roast fish, meat and vegetables.  We also use this for salads.  For deep-fat frying we use a sunflower oil as it has a higher smoke point.  Finally our best extra-virgin packed with robust fruitiness is used for drizzling over food after it is cooked, such as soup or steak.  It lends a lovely finish to a dish, a glossy appearance and an appealing aroma as the food arrives in front of the customer.
Store your olive oil in a cool dark place and definitely away from direct sunlight as heat can cause the flavour to change, but not too cold as it will solidify.
Once a bottle of oil is opened it starts to oxidise.  To enjoy at its best use within 6 to 8 weeks.
Colour has nothing to do with flavour or quality – green olives make green oil, riper black ones make  golden oil. Professional olive oil tasters use blue glasses so that the colour doesn’t distract them.
Use the stronger flavoured oils with care, they can dominate delicate flavoured fish or meat but be perfect to drizzle over pasta
Extra virgin olive oil has a low smoke point so we don’t use it for deep fat frying or when very high temperatures are required.