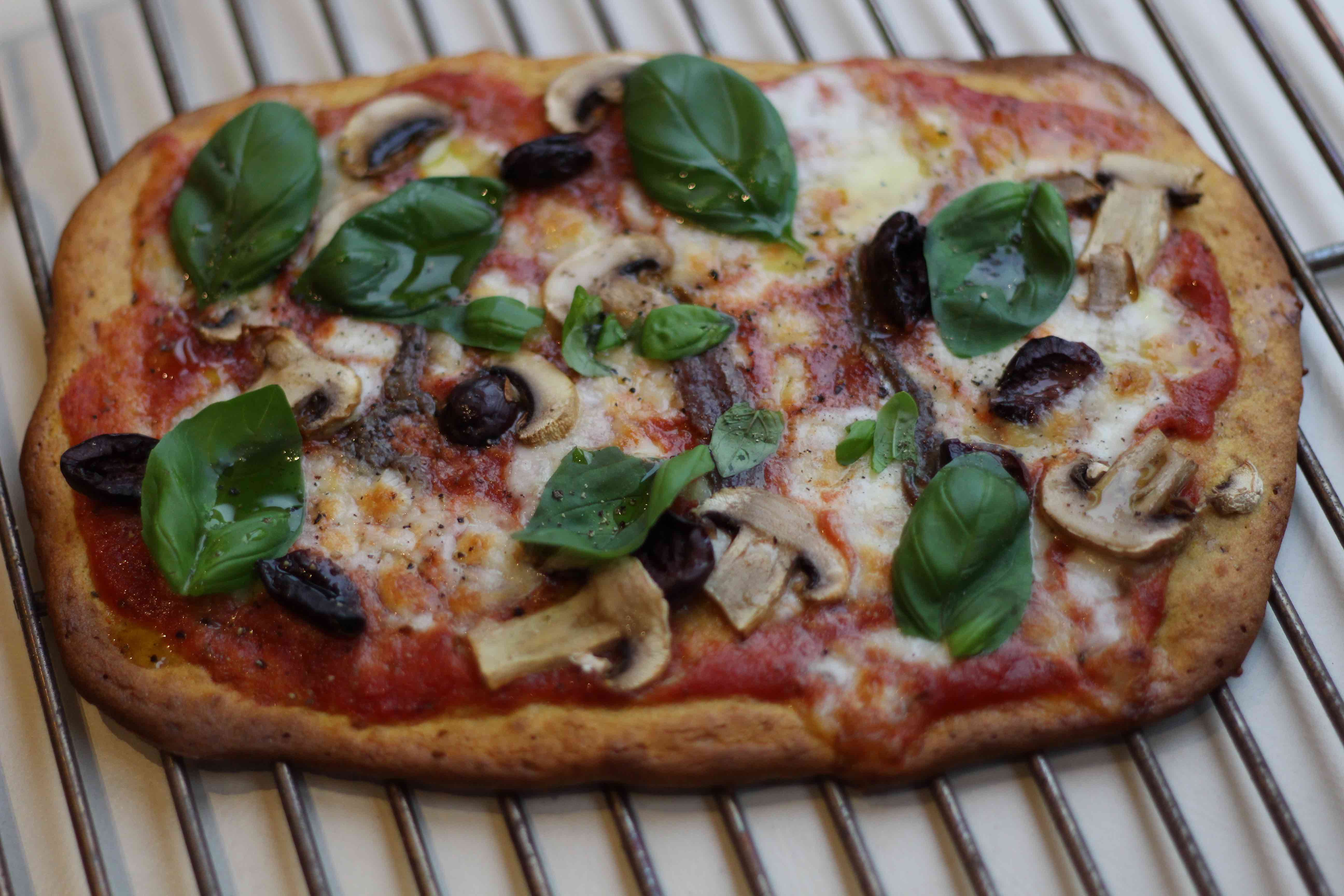 Giancarlo was recently diagnosed with coeliac disease and as a result is no longer allowed gluten in his diet. This was pretty devastating news for a man who is used to having at least one and sometimes two bowls of pasta a day, a man with a penchant for thin and crispy wood baked pizza and spongy sea salted rosemary focaccia. However, Giancarlo has been very philosophical about his diagnosis and sees his journey into the gluten free lifestyle as a culinary adventure – a learning opportunity.
I wanted to make Giancarlo a pizza that tasted every bit as good as the pizzas he grew up eating so I embarked on a quest to find the best recipe for a gluten free version and after many experiments and lots of tweaking I finally created a dish that the whole family enjoyed and one that stands out… not because it’s gluten free but because it’s so very tasty. Here it is:-
Sweet potato and buckwheat pizza
Sweet potatoes, although a complex-carbohydrate, have a low-glycaemic load so they release energy slowly into the body. The sweet potato can be replaced with grated cauliflower, broccoli or mashed chickpeas. Alternatively leave it out and enjoy a lighter crust with less carbohydrate but I think the sweet potato gives bulk and sweetness to the “dough”. This gluten-free crust can also be cut into squares and used as a base for canapés instead of bread.
Makes 4 small palm-sized pizzas
For the base
100g cooked sweet potato, mashed
100g buckwheat flour
15g Parmesan cheese, finely grated
2 large eggs, separated
Half a teaspoon fine salt
Three-quarters of teaspoon gluten free baking powder
120ml cold water
For the sauce
200g tinned plum tomatoes
1 heaped teaspoon dried oregano
Half a teaspoon fine salt
1 tablespoon extra-virgin olive oil
For the pizzas
1 125g ball of buffalo Mozzarella, drained
2 tablespoons extra-virgin olive oil
Handful of basil leaves
Further toppings could be olives, rocket, ham, figs, smoked bacon, chorizo, salami, spinach.

Bake the potato in the oven or microwave until soft. Preheat the oven to 200oC and put two oven trays inside, spaced apart, upside down so that they become hot. Cut two pieces of baking parchment the size of the trays and set aside for later. Make up the tomato sauce by blending the ingredients together with a stick blender or liquidiser.
Scoop out the flesh from the skin and put into a bowl, mash with a fork or potato masher and allow to cool. It should be smooth, if it isn’t use a stick blender to get rid of any lumps. When the potato is at room temperature add the rest of the ingredients including the egg yolks but leave out the egg whites at this stage. Beat together until smooth using a wooden spoon or spatula. Whisk the egg white until it forms stiff peaks and then gently fold into the potato mixture a little at a time. Do not over mix as you want to keep the mixture as light as possible.
Divide the mixture into four and spoon onto the baking parchment, two per piece. Spread them out with a metal spoon or a large palette knife into discs around .5cm to 1cm thick. Put them into the oven to cook for 8 minutes or until firm to the touch and the edges become golden brown. Remove from the oven and peel away the paper to stop it sweating underneath – keep the paper for later. Put the pizza base onto a wire rack to cool for a few minutes. This stage can be done in advance leaving the pizza to be cooked again later after topping. It can also be cooled, wrapped tightly in cling film and kept in the fridge for 3 days or frozen for 3 months at this stage. Defrost before use.
When you are ready to cook the pizzas spoon over a couple of tablespoons of the tomato sauce over each one and tear over the mozzarella. Dress with any further toppings and slide them back onto the baking parchment into the oven using a pizza shovel or flat tray. Bake for 8-10 minutes until the Mozzarella is bubbling and the crust becomes crisp and browned. Remove from the oven and serve with a drizzle of the remaining oil and basil leaves.