October 19, 2016 In Adventures By Caldesi Admin

Our big, bright, shiny new book is out! It’s called Sicily, Recipes from an Italian Island. It follows in the series produced by the brilliant publisher Kate Pollard from Hardie Grant UK. She steered our happy little crew through the regions of Amalfi, Venice, Rome and now Sicily to produce stunning books with Helen Cathcart’s enticing photographs.
It’s been amazing to see the complete contrast in the cooking styles from the North to the South of Italy. Venice was about spice and rice, Amafi was fish on a dish as well as pizza and lemons everywhere, Rome was quick dishes and famous pasta greats such as Carbonara, Cacio e Pepe and Amatriciana – but Sicily, well that’s a whole different thing. I was astounded to read about who had lived in Sicily; practically everyone has invaded this poor, but strategically-placed little island. Most did nothing to improve life for the locals but all left their mark on the food. I think it must be one of the first places that had fusion food. You will have to read the book for our culinary time line of Sicily but here are a few points that I thought fascinating:- 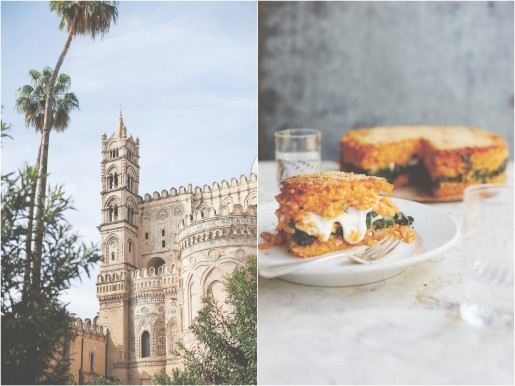 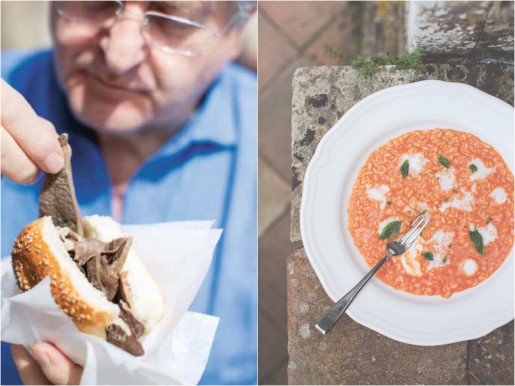 There are loads more fascinating facts about this melting pot of culinary history. Here is one of my favourite recipes from the book that is easy to make and has loads of uses.
Marmellata di Mandarini – Clementine marmalade 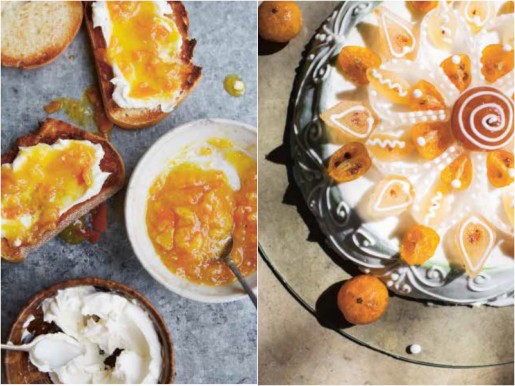 We loved this bright orange bittersweet marmalade for breakfast on yoghurt when we were in Sicily. It is equally at home spooned over a ice cream, ricotta or on toast with mascarpone. The perfume of bubbling clementines fills the house as you make it and a jar makes a good gift.
This will be a loose-set marmalade and fairly low in sugar compared to traditional varieties. There isn’t enough sugar to enable the marmalade to be kept safely out of the fridge, but since we’re only making a small batch a few jars don’t take up too much room.
Makes approximately 1.5 kg (3 lb 5 oz)
1 kg (2 lb 3 oz) clementines
juice of 2 lemons
1 litre (34 fl oz/4¼ cups) water
400 g (14 oz/2 cups) granulated sugar
Remove the stalks and hard knobbly bits at the top of the clementines and cut in half, keeping the skin on. Now roughly chop into smaller pieces by hand or in a food processor. The pieces should be no bigger than 1 cm (½ in) cubes. Put them into a large heavy-based saucepan with the lemon juice and water and bring to the boil. Turn the heat down to a simmer and allow the mixture to bubble away slowly for 1 hour. By this time the skins should have softened so that you can squash them easily with a spoon against the side of the pan and the marmalade will have thickened to a soft, runny set.
Next add the sugar and stir through. Bring to a rapid boil for around 5 minutes or until the sugar has dissolved. Pour into clean, warm jars (I do this by rinsing them out with hot water from the kettle) and screw on the lids. Allow the jars to cool and keep in the fridge.
The book is available from Amazon and all good bookshops but you can order copies signed by us for you here.

‘Sicily – Recipes from an Italian Island’ published by Hardie Grant. All photography by Helen Cathcart.